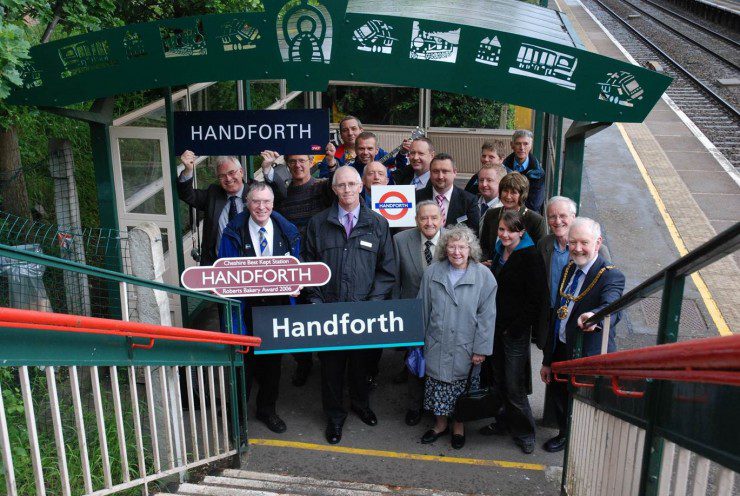 Sometimes known as the ‘Gateway to Cheshire’, Handforth has a centrally located train station which benefits from two trains an hour to Manchester via Stockport. Friends of Handforth Station are highly regarded in the world of community rail, and have won numerous awards for their work in making the station a more attractive place. Handforth is home to several employers, including Halcrow and Taylor Young.

The National Trust run Quarry Bank Mill and Styal Country Park can be reached from the station by an easy mile and a half walk.

Handforth now has an improved southbound service from Manchester with better timings.

A visit to the station will reveal the work of the very active friends group. From gardens to art installations, there’s always something new to see.

If you are thirsty after your station visit cross the road  to the Railway, a Robinson’s pub which has an interesting display of railway memorabilia including one of the foreign railway signs seen on the station.

In their Laurel and Hardy room there is a fascinating collection of figures and photographs of these comedians. The pub holds Quiz Nights on Thursdays and Tribute nights on Saturdays.

For a more substantial snack, turn left out of the station, right at the traffic lights into the centre of Handforth for pizzas, Chinese, fish & chips, American and English take-always.

In the evenings, people travel for miles to the Handforth Chinese Restaurant, Italian, Indian and most recently, Greek restaurants – look out for flying plates and dancing in the street outside the Hellas Taverna on a Saturday night!